We hooked MMS Student Gavin Philpotts up with work experience for the UK’s biggest trance night, IllumiNaughty, on their biggest ever event. The work experience has landed him full-time work as a visual decor architect.

To set the scene, here’s the write-up of the event Gavin worked at:

“Manchester’s BIGGEST Halloween Festival is back. illumiNaughty is an event like no other… say goodbye to bland, lifeless warehouse spaces and enter what can only be described as an alternate clubbing universe… 5000 clubbers weaving their way across 6 stages transformed into mythical “Lost Cities” waiting to be explored…

So Gavin tell us a bit about your Illuminaughty work experience you’ve been doing recently and how you got this opportunity?

I got the opportunity through MMS, they directed me through. I got to speak to a lady called Laura and then all the way through to the head of Illuminaughty. I then went to Bowlers Thursday morning at 11am and I was greeted by Lefteris the head of IllumiNaughty. He was really friendly and basically he showed me all around Bowlers and all the dancefloors. We did some meeting and greeting with everyone working on the site, and then I started shadowing the second in command Eleanor.

I was with her all Thursday setting up inflatables, using scissor lifts and cherry pickers to get up into the rafters. I was listening to the instructions for most of the day, there’s no room for breaks. I worked from 11am to midnight that Thursday and that was just working constantly. Then I went home and got back down to Bowlers on the Friday about 2pm and then I worked until 11pm that night. Doing the same stuff basically, setting up camo netting, backdrops, visuals, décor and the pyramid that’s used for our projections, which was quite demanding to say the least. 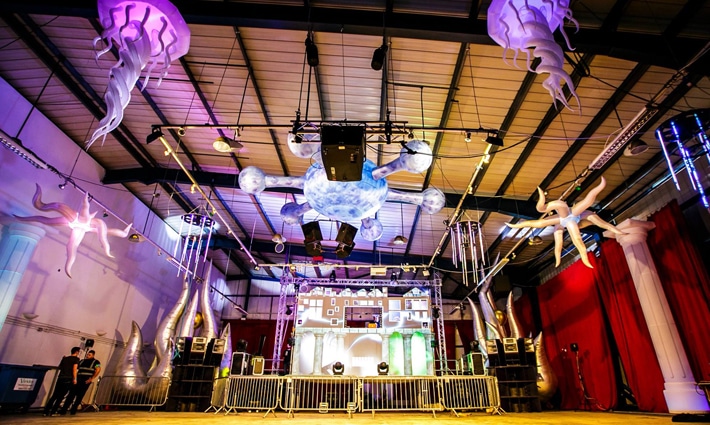 Did you have any experience previously with setting all that stuff up?

None at all it’s the first time I had done anything like that. I must be a natural, I just got on with it and I somehow knew exactly what I was doing it was quite strange.

So did you receive any training whilst working there?

Yes, I was training all Thursday with Eleanor and then Friday I was left to my own instructions for example in the arena the inflatable wasn’t turning on. So I changed the motor in it, changed the plug in it and it still wouldn’t work. So we realised it must have been the extension lead but the lead was 20m and was all tied up in the rafters. So I had to get up there take the whole cable down and put in a new one and thankfully it worked.

Then Saturday I came back in at around the same time 11am this was the day of the event – we found that there was a massive gas leak in bowlers that delayed us by 5 hours! It nearly cancelled the whole event! So that was stressful as we were all evacuated from the building. Fortunately enough it was sorted in time, but it put everybody behind 5 hours as it’s not just IllumiNaughty, we have other companies there setting up the lazers and the lights etc.

We were all under so much pressure and I was actually in a cherry lift at 6:50pm and the gigs just about to start and someone shouted ‘Gavin you need get that out the building we can’t have a cherry lift on the dance floor!”

We managed to get everything done and it was such a success seeing as though we were under so much pressure. 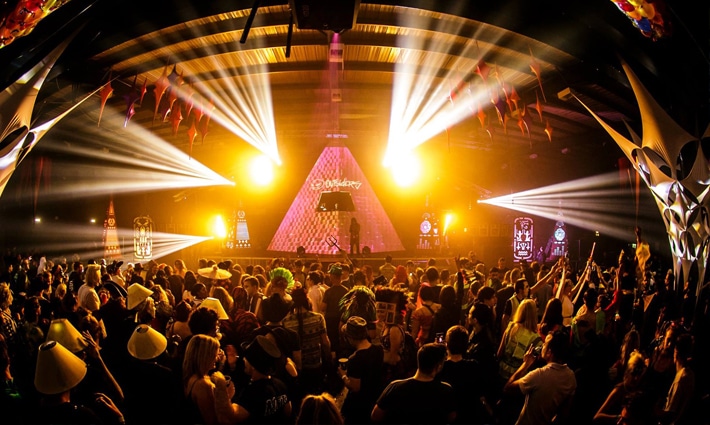 Did the night itself go well in the end then?

Oh it was the biggest success they’ve ever had; it was absolutely huge! It was something else – 5000 people! I was in control of all the artists sorting them out with drink vouchers and what ever they needed. One of the top artists Growling Mad Scientists had a really bad arm and was struggling so I was helping him and carrying his bags back to his car and just trying to be as professional as possible. Lefteris was over the moon and completely overwhelmed and said “it’s people like you that I need to keep.”

So it wasn’t just stage management it was also artist liaison too?

Yes, greeting them making sure they are comfortable because we’ve got circus acts using fire I was also making sure there were fire extinguishers were nearby and ready to go in case of an emergency. Things like that. 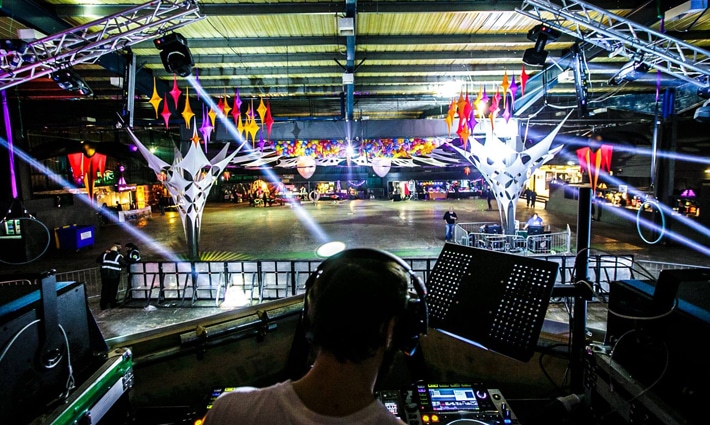 So has anything come from this opportunity then?

Yes, fortunately due to the hard work I put in and the commitment that I showed to Illuminaughty, they’ve offered me a position as a visual décor architect, stage manager and DJ and that’s a full time placement.

They do their own parties and everything but they’re also a décor architect firm so they also set up other venues around the country and Europe renting out their décor for other clubs to benefit from it.

For instance, tomorrow I’m going to Birmingham with them to set up a venue there using our decors, it’s nothing to do with us it’s somebody else’s club night. We’ll go back the next morning and strip it all down and come home. But when we have our own parties I’ll be DJing, doing stage management and all the visuals and decors also.

You’ve landed yourself a really good position there!

It’s massive because its given me the opportunity now as a producer as I can just hand one of my demos to the artists or the management. Like John Fleming of Joof recordings and H20 records are both keeping an eye on me, which is great as they are huge labels in the trance scene. Yeah it’s fantastic news, words can’t describe how happy I am. 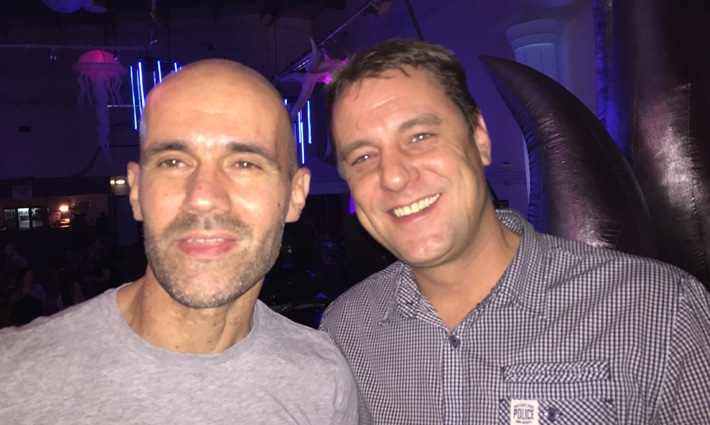 What would you suggest to anyone looking to get involved in this field?

But for advice for anyone out there looking to do this sort of stuff would be to be yourself, don’t pretend to be somebody you’re not and always do what your asked to do and show that your committed to role. If you’re not happy or a bit out of your depth don’t be afraid to ask someone for help.

Once again commitment and being on time are very important. Being respectable and ask for a cigarette break rather than just disappearing as you may be needed and don’t look for stardom.

At school of electronic music, we work hard to get the best students into work experience placements. Fancy studying the course Gavin did? Check out our Music Production, Audio Engineering, Music Business and DJing Diploma.